“Supporting education is not a choice we can make or not make, it is a necessity.” – Emmanuel Macron

Emmanuel Macron (French president) and Rihanna joined hands together to make a change and improve education in developing nations. They brought this mission to a Financing conference of the Global Partnership for Education (GPE) in Senegal. The conference was attended by African heads of state and World Bank president Jim Yong Kim. 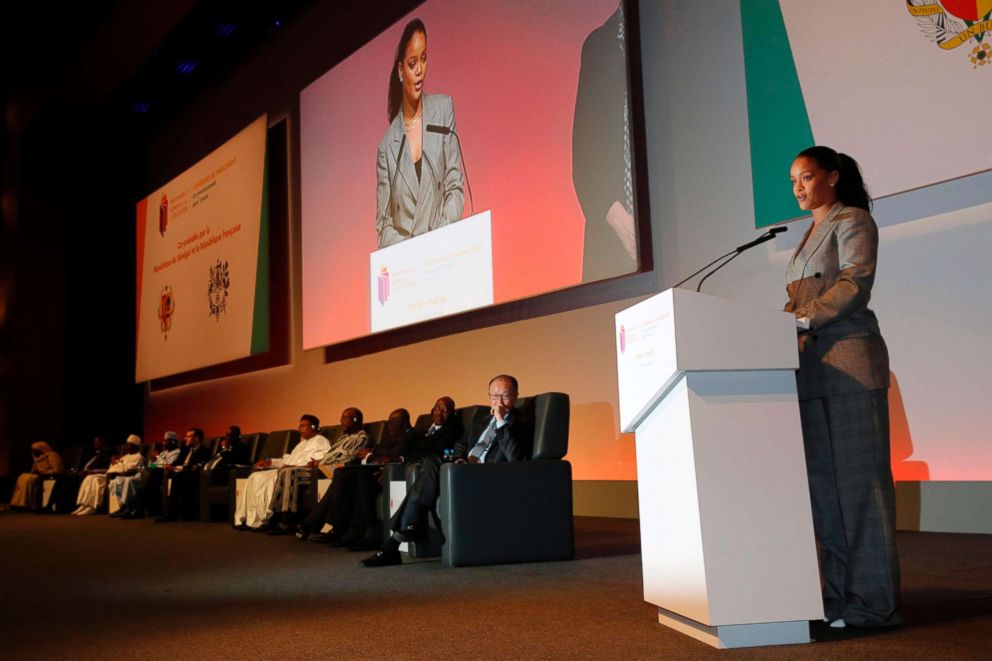 Rihanna addresses the conference GPE Financing Conference, an Investment in the Future organised by the Global Partnership for Education in Dakar on February 2, 2018.

Rihanna attended the Global Partnership for Education conference in Dakar, Senegal. She closed the event with a strong and sweet speech. Her advocacy is to improve educational access for boys and girls globally. Rihanna’s Clara Lionel Foundation holds this as one of their main goals. Aside from the educational aspect  they promote art as well. 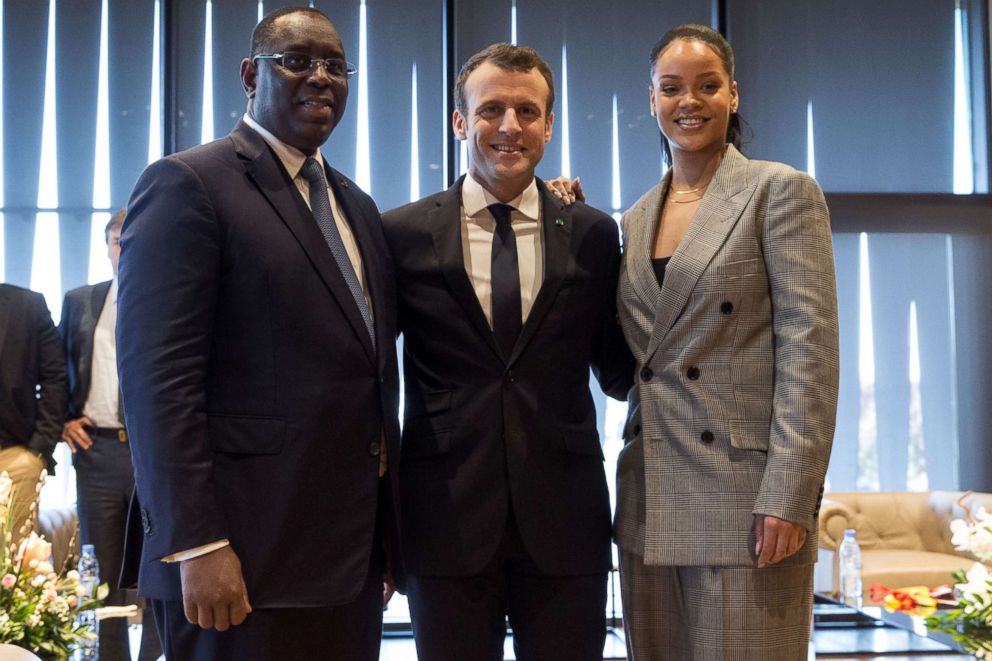 About 264 million children worldwide are not attending school according to GPE. The main purpose of the GPE conference was to raise money for the purpose of education in the poorest nations of the world. Macron urged the world leaders to donate towards the fund as he said that France will donate 200 million euro’s ( 248 billion dollars). Senegal will be spending 7% of it’s GDP on education , Macron praised Senegal for their generosity. 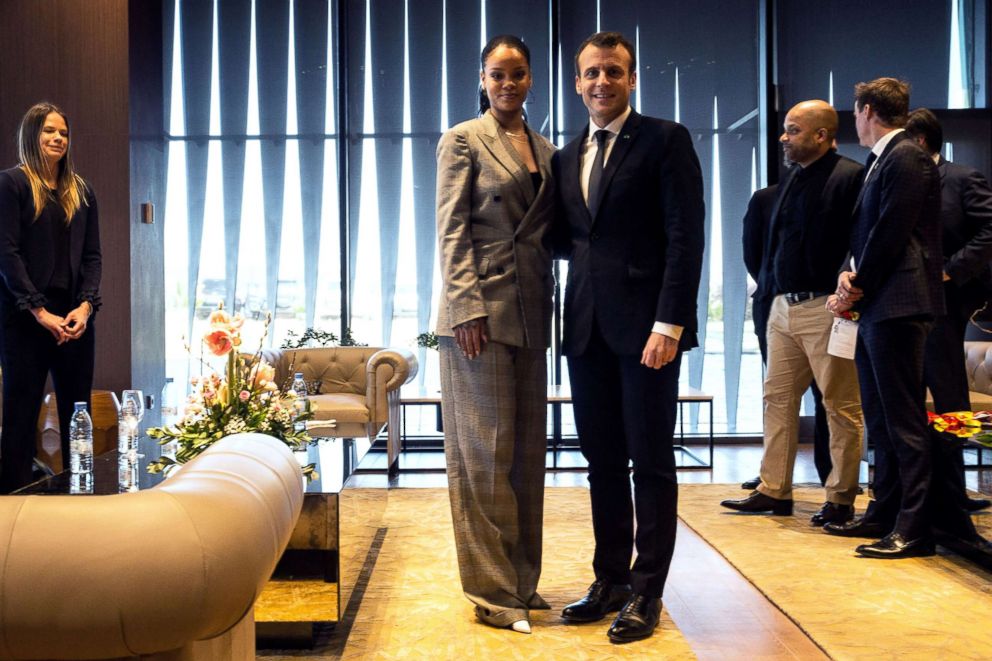 French President Emmanuel Macron pose a they attend the conference “GPE Financing Conference, an Investment in the Future” organised by the Global Partnership for Education in Dakar on February 2, 2018.

Education is “the only single response” to the extremism threatening West Africa. – Emmanuel Macron

#metoo movement started by Tarana Burke – in the spotlight

RiRi honoured for her ‘extraordinary commitment’ to Caribbean island as it makes a historic political transition.

RiRi Rihanna honoured for her ‘extraordinary commitment’ to Caribbean island as it makes a historic political transition.

The singer was honored Monday in her native Barbados during its presidential inauguration, which served to mark the country becoming a republic. Barbadian Prime Minister Mia Mottley told the crowd: “May you continue to shine like a diamond and bring honor to your nation by your works, by your actions and to do credit wherever you shall go”.

Barbados formally cut ties with the British monarchy by becoming a republic almost 400 years after the first English ship arrived on the most easterly of the Caribbean islands.

Melanin Excellence from Politics to Disney – our 2019 so far

We are in the home stretch of 2019 and 2020 is fast approaching! What a year it has been! Black Excellence is truly on the rise! Personally, I have never been this proud to see our culture represented in such a positive light. – Tiesha

Kamala Harris, United States Senator from California, is really making her mark in the presidential race. She is the first black woman that has run of the office for president in over 9 years. The US has had 11 black women to run for President of the United States over the years.

Her campaign slogan “For the People” is not just a slogan but a true testament for the changes she has initiated in her political career. From introducing tax cuts to the middle class, proposals of tuition-free higher education, protecting the rights of refugees and immigrants, and so much more. Her work showcases her commitment to the advancement of the United States. These are perfect qualities of a President!

But Kamala Harris is not the only Black presidential candidate. Wayne Messam, a Florida Mayor, is also in the running for the election. His parents came to Florida from Jamaica with only a 5th-grade education to build a better life. The work ethics that were instilled in their son drove him and his wife Angela in building several highly profitable minority construction businesses.

In the career of Wayne Messam, he has been an advocate of higher wages, job security for US workers, leading the cause of protection of immigrants to come to the US for a better life, and many other contributions to the country. His campaign slogan “For America” shows that he has what it takes to bring wealth and prosperity to the US.

In Entertainment News – Disney has not one but two new remakes that have featured lead black cast members. This is a major accomplishment and advancement for Disney. The last black lead role in Disney pictures was The Princess and The Frog released in 2009.

The Little Mermaid Reboot featuring Halle Bailey as Ariel is a beautiful addition to the Disney family. Halle Bailey is a part of the R&B Group Chloe x Halle who rose to fame after their rendition of Beyoncé’ Pretty Hurts. This led to the group to be an opening act for Beyoncé’ Formation World Tour in 2016.

Halle being the starting role unfortunately suffered major backlash from critics.  Hashtags #NotMyAriel were trending on Twitter causing an uproar of negativity to the star due to the changing of the skin color by Disney from fair to a melanin complexion.

Even through the criticism, an outpouring of support on social media came forth for Halle. Fellow celebrities Willow Smith, Mariah Carey, Donald Glover, Jordan Sparks, and many others came to showcase support for her as well for the upcoming remake of the Disney film.

The Lion King remake has made over 540 million dollars to date. It was reported by Forbes magazine to be the top-grossing live-action remake! Hats off to the cast!

This was a great breakthrough for the youth in film. Working alongside Regina Hall, Preston L. Holmes, and Josh Martin who also executive produced this film, offered support and guidance as she embarked on this journey. This movie opened more doors of opportunities for Marsai to produce a film adaptation of B.B. Alston’s debut novel Amari and the Night Brothers and another film Step Monster with future release dates coming soon.

In Beauty News -The US has three major Black pageant winners!

This is a record-breaking history-making victory to have such representation at one time in this space. For years black beauty has been commercialized and society unaccepted.

As a black woman being born and raised in Mississippi, I have seen firsthand many accounts of racial injustice and heard countless stories from my elders. To see Black people, rise above the pressures of opposition and move into their appointed victory in black excellence inspires me to do the same.

On the sixth of May, 2019 something horrifying happened. The Dutch lifestyle and fashion TV show allowed one of the cast members to make racist comments about Afro and kinky curly hair.

This exploded in a negative in all the news platforms and many if not all black and brown men and women were grossly offended. Robin Ramos (20) and Kymani Ceder (19) wrote a poem as a response. They used the poem as a positive representation by, from and for the Afro-Dutch community. The goal is to use the movie “The Crown” (De kroon) created by Robin and Kymani to create awareness and free the Black community from the chains of stereotyping of Afro hair.

Robin and Kymani chose to form the video as a school assignment with a theme family.

Using ‘Black hairstyles’ as a point gave them the inspiration to show different historical and tribal connotations involving Afro hair. In many cultures, it is still a way to be in contact with the ancestors. Besides braiding, is doing hair an activity done throughout time and has it has been a signature activity in black families.

The short film portrays a paradox time-machine with precolonial impressions. It takes you on a journey back to the age of where the traditional braids were used to connect the past with the present.

The movie is a re-enactment of history acted out by present-day Dutch Africans. How do Dutch Africans experience their African identity after the physical alienation that has taken place after slavery? How do they feel about their hair now? How do we feel during and after watching the short film?

Around 80 people were involved by the making of the short film: De Kroon. Some well-known artists and actors from the Dutch entertainment such as Sylvana Simons, Veronica van Hoogdalem, Digitzz, Clarice Gargard and Guillermo Babel.

“De Kroon” is a poetic storyline about the relationship Afro Dutch citizens have with their natural hair and hairstyles. The Natural Hair movement is becoming more and more visible in the world. And we are loving it.

For all readers from the Netherlands: Want to read more about the backstory and behind the scenes, straight from the creator/inspirator of this video? click here.